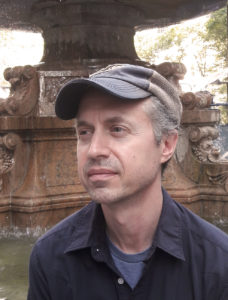 Mike Cavallaro is from New Jersey and spent his formative years drawing strange things from his imagination and playing guitar poorly, two things he’s been doing since kindergarten and continues to do to this day.

Like most cartoonists, Mike wanted to do something else with his life. Actually, first he wanted to “do what Frank Frazetta does” (he didn’t know what that was called) (…it’s called illustration), then he wanted to play guitar poorly in a band (which, unfortunately, is exactly what he did…) After several bands, Mike decided to stick with the drawing.

Mike worked for a few years coloring mostly superhero comics because no one wanted to publish the types of stories he wanted to tell. Mike sidestepped into the animation industry where they would at least allow him to draw things. During that time, book publishers started making graphic novels about all sorts of things, so Mike sidestepped back to publishing and received a Will Eisner Award-nomination for his debut graphic novella, Parade (with Fireworks), based on a true story about his family’s experiences in Italy shortly before World War II.

Mike teaches at the School of Visual Arts, is a member of the National Cartoonists Society, and currently lives in Brooklyn, where the exorbitant rents prevent him from buying more swords.

Mike is represented by Caryn Wiseman of Andrea Brown Literary Agency. ABLA represents the finest children’s book writers and illustrators — with projects ranging from board books to young adult novels. Based in California, ABLA is currently celebrating its 36th year.