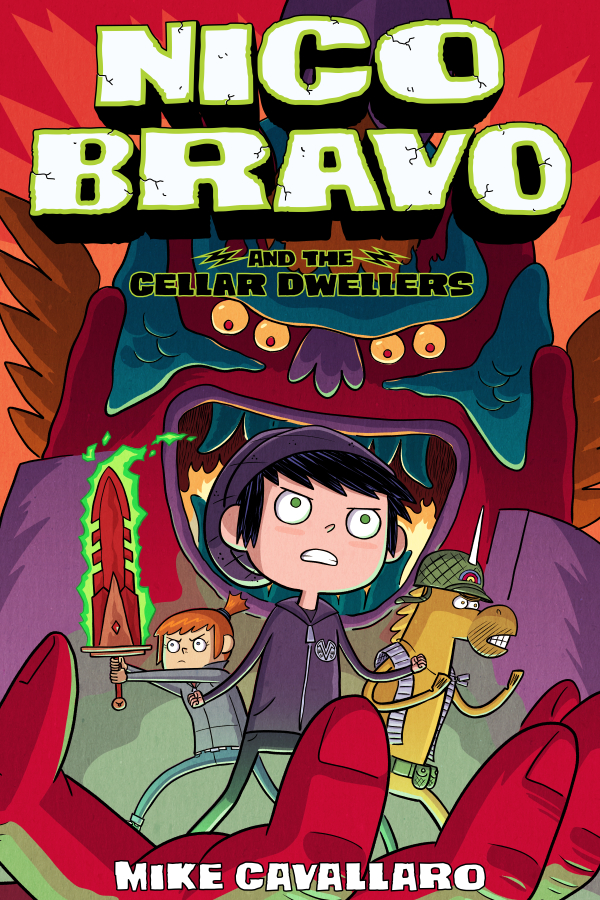 BOOK 2 IN THE NICO BRAVO SERIES

Nico’s enemy is finally revealed: Ahriman, God of Evil! Ahriman is fed up with Nico thwarting all his heinous plans and sends a shapeshifter named Orcus to Vulcan’s Celestial Supply Shop on a covert mission to take Nico and his crew down.

Orcus mistakenly unleashes a dangerous ‘Misery’ from the God of Misfortune’s pouch, threatening everyone in the Supply Shop, but also discovers the missing link between Nico, the Unicorn Wars, and Reality itself! What will happen to Nico and his friends when all their troubles converge in a desperate battle for the fate of the Universe?

KIRKUS: “SMART, FAST-PACED FUN. Jumping right in where Nico Bravo and the Hounds of Hades (2019) left off, young Nico Bravo, resident of the enchanted isle of Celestina and employee at Vulcan’s Celestial Supply Shop, is not looking forward to the annual visit of Sam, better known as Abonsam, the West African god of misfortune and pestilence—who, despite his bailiwick, comes across as a pretty likable character. When one of Sam’s monsters is released, however, all at the shop begin to turn to stone. As Nico’s friends are petrifying, Orcus, a shape-shifting monster henchman of Ahriman, god of evil, has broken into the shop to steal the last piece of Aether, the building block of all things. Nico embarks upon an epic quest to save his friends and their home—along the way encountering Atlantean flying saucers, unicorns stuck in a time loop, and steamroller scorpions—but not before he learns his own origin story. Cavallaro’s sophomore graphic novel is both fast-paced and engaging, filling its full-color panels with enough intrigue and explosions to keep pages flying. Fans of Rick Riordan’s works should feel at home here with its mix of multicultural religions.”

SCHOOL LIBRARY JOURNAL: “Myths and legends have never been more fun than in Nico Bravo, a rollicking mythological series that would make even Joseph Campbell laugh out loud. Cavallaro’s art style is simple and cartoon-like with solid colors for the characters and little shading. It results in a flowing style similar to Adventure Time that works great with this series. You could almost imagine this being an ongoing series on Cartoon Network. The series doesn’t take itself seriously, but the characters are given a lot of personal moments that help you root for the heroes and laugh with the bumbling villains too. Nico is a selfless and brave hero who sees the good in all people. Buck and Lula are funny work companions. Eowulf is a great evolved heroine who has a great character arc of growth. Vulcan, the god of the forge, also has time to shine in volume 2. Here’s to a rousing and fun series that fans of myths and legends will enjoy for years to come.”

MY BEST FRIENDS ARE BOOKS: “The perfect blend of action, mythology and laughs that makes it one of the most entertaining graphic novels (for both kids and adults).”

SEQUENTIAL TART: “While it definitely should be enjoyable for the target audience (ages 8 – 12), older readers can still enjoy it as well. I dare say that fans of Adventure Time will probably like it. It has adventure, battles, self-discovery, and alliterative exclamations (Nico’s favorite is “Great Gula’s Ghosts!”). The cellar dwellers are an awesome bunch, and the cellar itself is a pretty amazing adventure all on its own. The art is excellent. The coloring is outstanding, bringing light and energy and a myriad of colors to each scene without being too “bright”. There is a LOT going on in this volume. There’s tons of humor, too. It’s just under 200 pages and a pretty dense read.”

YOUTH SERVICES BOOK REVIEW: “Filled with minute details to pour over, DayGlo colors and lots of action, these two volumes will win instant fans. The art is lively and doesn’t take itself too seriously. The look of the characters and wry tone reminded me of the original Rocky and Bullwinkle Show: all the characters have big, googly eyes on large heads with lumpy peanut-shaped bodies, but spindly arms and legs. Nico tends toward skaterboy chic, with his all black getup, including a black beanie pulled down over his shaggy hair. Cerberus is shown with three drooling heads, but the trio is a bulldog, a chihuahua and a pink poodle. The crazy and secret unicorn army definitely recalls the crew of Kelly’s Heroes. I liked the convention of using trading cards as new immortals are introduced into the story to give readers a bit of background information. The books are nicely bound, with thick paper and excellent color reproduction and look as though they would stand up to heavy use.” Rating: 4 out of 5 Stars.

DADDY MOJO: “This is not a pejorative to other graphic novels, but Nico Bravo and the Cellar Dwellers is a very smart graphic novel. [T]his series is awesome [and] also a lot of fun. The art is detailed and evokes any number of inspirations from Futurama, Johnny Test, Phineas & Ferb, and Spongebob. It’s also uniquely weird enough to attract those middle-school readers (or older) who think that they don’t like stories that could have loose threads of a fable inspired story. 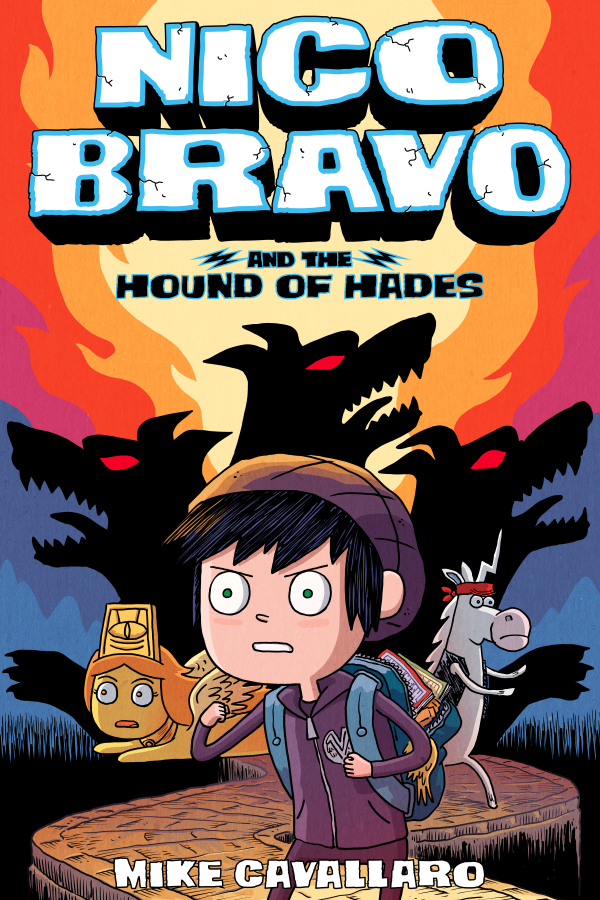 BOOK 1 IN THE NICO BRAVO SERIES

SCHOOL LIBRARY JOURNAL: “Familiar characters such as Gilgamesh, Zeus, Hades, and Persephone join new mythical heroes and villains in this humorous adventure. The vivid colors are a perfect fit for this fun, fast-paced graphic novel. VERDICT: An engaging series opener recommended for most middle grade collections.”

PUBLISHERS WEEKLY: “Cavallaro’s (Decelerate Blue) bright, psychedelic illustrations extend the dimension-hopping plots about Nico and Eowulf, while a subplot tracks the rest of the supply shop staff as they try to prevent a future in which the Unicorn War never ended. Introductions to various mythical beings—including Greek mythology’s Zeus, Egyptian mythology’s Iškur, and Norse mythology’s Thor—add interesting informational layers without slowing down the interwoven plots. A final discovery sets the stage for the next volume in this graphic novel series.”

GRAPHIC NOVEL RESOURCES: “…a real smorgasbord for any fan of myths and legends. This book is also a feast for the eyes, with the artwork being a huge reason why everything works so well. [It] features great characters, a plot full of twists and turns, and lots of mythological hi-jinx. It juggles all sorts of stories and players, and it does so with panache.”

NERDOPHILES.com review: “The perfect series to appeal to readers who loved the Percy Jackson series, the Olympians graphic novels, or books like Captain Underpants and are looking for some weird mixture of all of them. It’s an odd request, sure, but Nico Bravo manages to fit the bill. The attention to detail and color really pulls you into the world especially the more fantastic aspects of it. Nico Bravo and the Hound of Hades is a great book for kids that love mythology but also have a great sense of humor.

NO FLYING NO TIGHTS review: “A delightful fantasy comic (with) a lot going for it. Cavallaro incorporates a few fun side plots that add humor and intrigue. Well-placed details about Nico’s backstory generate further interest, and, while the main story wraps up in a satisfactory way, there is plenty of room for further adventures. With its vivid art and fun story, Nico Bravo and the Hound of Hades should be a solid addition to public library collections. Readers who like fractured fairy tales or mythological retelling should enjoy this fun and humorous fantasy adventure.”

JEAN LITTLE LIBRARY Blog review: “A funny, exciting, and interesting start to a new series. Hand this one to fans of Percy Jackson, Bone, Dream Jumpers, and other fantasy adventures.”

PAGE 45: “There’s much you’ll find to chuckle at here. This is also, though, a substantial and sophisticated adventure yarn in story-telling terms which I reckon will appeal greatly to fans of Luke Pearson’s HILDA.”