I’ve been lax … some new stuff out and coming out that I ought to make mention of here.

First off, “Nico Bravo & the Celestial Supply Shop” is finally out in the world in The Phoenix Weekly Story Comic magazine #34, where the Norse god Odin is planning some sort of surprise for Jupiter’s birthday, but it might not be the good kind of surprise. Can Nico figure it all out before it’s too late? 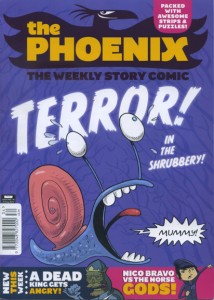 Nico’s next appearance will be in The Phoenix #43 — a super scary Halloween issue — when Vulcan’s Supply Shop gets an unwelcome visitor in “The Dream Catcher”.

Next, Capstone continues its “DC Super Heroes” series with “The Man of Steel: Parasite’s Feeding Frenzy” and “The Dark Knight: The Joker Virus”, both written by Scott Peterson and illustrated by me. Very fun stuff for the kids in the DC animated style. 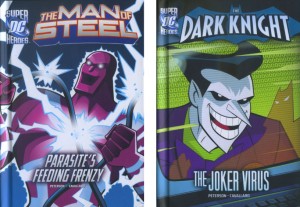 And, I’ve been working on something with a writer named Tom Barham. It’s taken me forever to put together the artwork for this project in between other work, but I’ve finally crossed a finishline with it. Sorry, no details, or titles or anything like that at this time, but here’s an image, more news eventually.

Advance copies of “Curses! Foiled Again”, the sequel to “Foiled” by Jane Yolen and I, have arrived! Gina Gagliano does a nice write up at the First Second Books blog with some photos, which I’ve stolen … 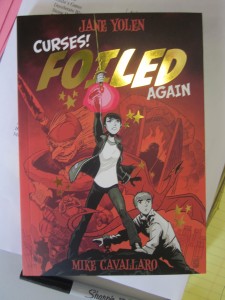 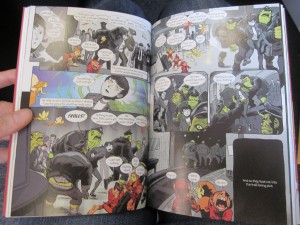 New York Comic Con is around the corner and once again I’ve partnered with Shirt For A Cure to produce this exclusive design for sale at the Con featuring Savior 28 and The Daring Disciple. All proceeds go to support SFAC’s efforts to help underprivileged women afford the high cost of cancer treatment and medicine. 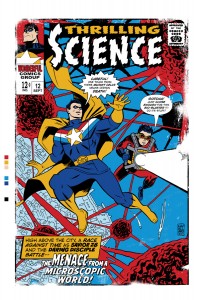