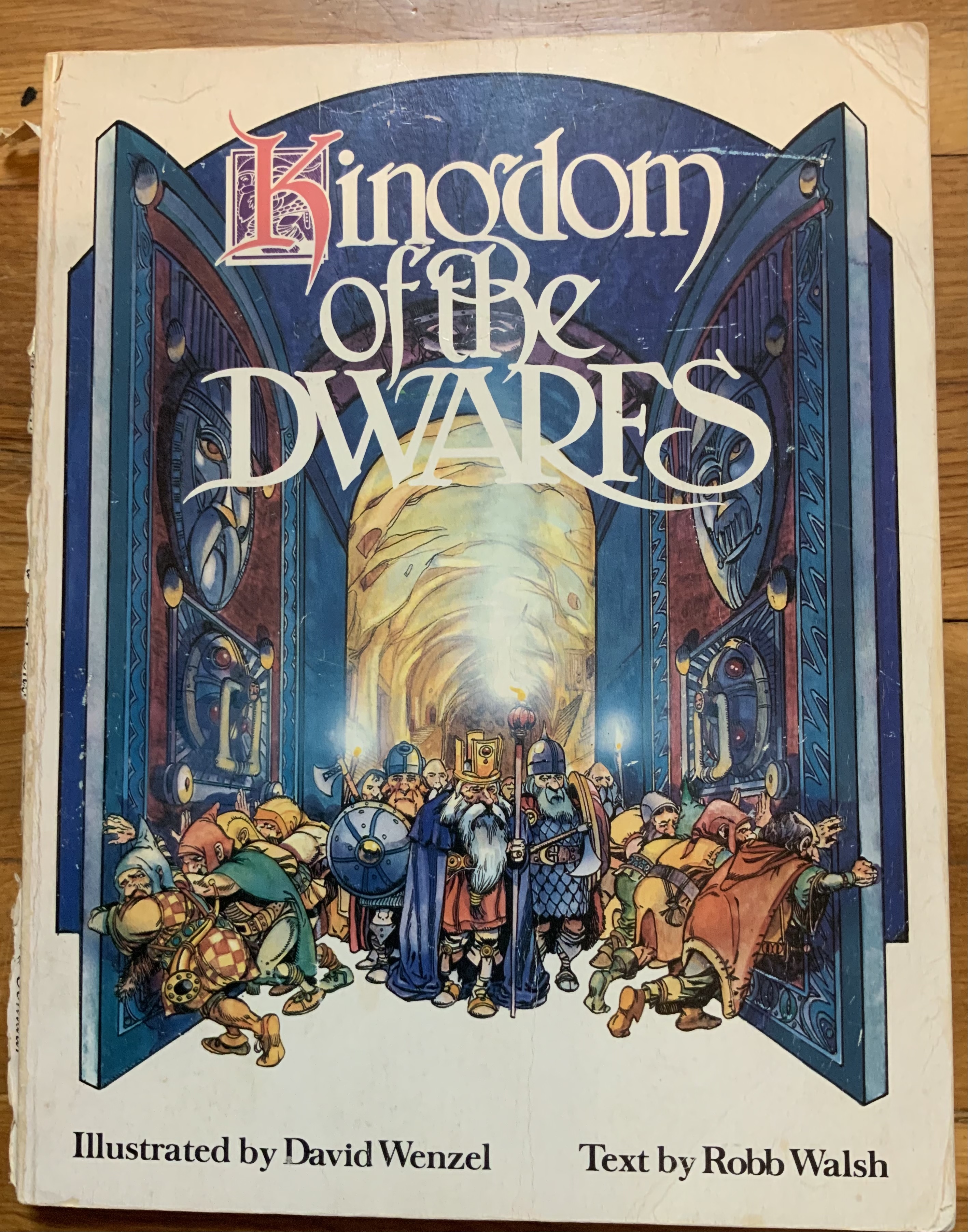 I was about 10 or 11 years old, in middle school, and I was telling my history teacher about a fascinating book I had just read. In 1979, a dagger with a blade of tempered steel was discovered buried in a garden in northern England. Carbon dating placed its manufacture at some 500 years before the Iron Age. The Royal Academy of Archaelogical Sciences contacted Dr. Egil Dvaergen, a specialist and professor from Storhamar University in Norway, who went on the lead the subsequent excavation of the garden. This revealed a deeply buried passageway, that lead to a vast underground complex, filled with ancient artifacts that pointed towards the existence of a previously unknown civilization…of Dwarfs.
Because flash photography can be damaging to the delicate patina of ancient artifacts, illustrator David Wenzel was brought on board to attempt to capture some of the sights the archaeological team unearthed. The result was the book I had read, Rob Walsh’s and David Wenzel’s KINGDOM OF THE DWARFS.

My history teacher listened patiently, and then carefully explained the concept to HISTORICAL FICTION to me, a format I was unacquainted with. In short, he assured me that the story was meant to seem real and convincing, but it was a work of fiction. Later that year, he assigned a project in which we would each write a piece of historical fiction. We were free to choose the subject and era. I wrote a “first-person account” of the 11th-century Viking king Harold Hadrada’s doomed attack on the English mainland, told from the point of view of one of his raiders.

But the effect David Wenzel’s illustrations had on me was very real. It’s hard to pinpoint any one influence, because I was inspired and influenced by so many things as a kid, but these DEFINITELY and SPECIFICALLY made me want to learn to paint, using the exact tools and materials I perceived Wenzel was using: pen, ink, and watercolor. My parents found a local watercolorist, Diana Patton, who gave lessons at her home, and I studied with her for a few years. That’s where I learned all my painting skills.

In 2013, I saw on their website that David Wenzel would be exhibiting in Artists Alley at New York ComicCon. I retrieved my dog-eared copy of KINGDOM OF THE DWARFS, and spent some time at his table rambling about what a huge influence his work had been on me. He was gracious enough to sign it for me:

”To Mike! Thanks for enjoying this book for so many years—I really am touched—Thank you and Best—David T. Wenzel”

I just saw that a new edition with more illustrations was released in 2018, and decided to grab a copy of that too, if only in the hopes of supporting the authors a tiny bit.